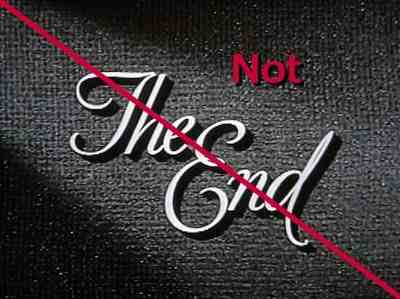 I don’t know about you, but I’m excited to go see Jurassic World. Click here to check out the trailer. I was (am) a huge fan of Michael Crichton’s Jurassic Park. It’s not that I am a science geek or a dinosaur enthusiast. I believe it’s the mixture of thriller, mystery, man versus beast and of course, Jeff Goldblum. And the one thing Jurassic Park hasn’t done is made me wonder…what happened next, thanks to now 3 sequels.

Unfortunately, that’s not always the case with most movies. I don’t know about you, but I’m often wondering and creating stories about what happens next to the characters. Do you do the same thing?

Here’s my take on three of my favorite movies (some spoilers ahead):

Dreamgirls: The film ends with Curtis standing in the aisle looking between Effie on stage belting “Dreamgirls” and Magic, the daughter they share but he didn’t know about because he was a complete a$$. After the show, he confronts Effie backstage in his typical Curtis way, telling her she should have told him he had a child. After putting up with so much from him including his total disrespect of her and his emotional abuse (calling someone fat is abuse), she lays him out with one punch. Afterwards, she files court papers for child support. Magic grows up to be an even more amazing singer than her mom. Curtis, of course, wants to manage her career to put himself back on top. Instead Magic chooses to be managed by her uncle, C.C. He not only writes Grammy award winning songs for her but also gets her the lead in a Broadway musical where she wins a Tony. Effie is sitting by her at the ceremony.

The Breakfast Club: Wondering what happened to the princess, athlete, brain, basket case and criminal was easy for me. Claire (Princess) became a nurse, married to Harry and has 2 kids. Andy (Athlete) never married, moved to Tampa and lives a playboy lifestyle. Brian (Brain) became a lawyer, married (and divorced his college sweetheart-she cheated). He’s now married to Rebecca and has a daughter. Allison (Basket Case) and her long-time boyfriend have been together for over 20 years. They met at Burning Man. Three years after that fateful day in detention, Bender become a mechanic and married Stacy, another mechanic at the garage where he worked. Today they have four garages in the area where he grew up.

Dirty Dancing: Baby changes her plans and attends Vassar College in Poughkeepsie rather than Mount Holyoke. This is to be closer to Johnny who is now Entertainment Director at the resort. They plan to marry after Baby finishes her fourth year. The relationship is tested by previous female guests who have come back to the resort looking to merengue once again with Johnny. Baby and Johnny eventually marry and open a dance studio in NY, offering scholarships to lower income families in the five boroughs.

Are there any movies left unfinished for you? Share them in the comments.