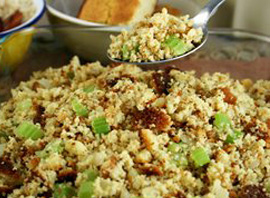 I haven’t been home to Dallas in over 10 years for Thanksgiving. I know my mom would like me there but she understands the madness of travel during that time.

Turkey? Check. Various vegetables such as potatoes, sweet potatoes, broccoli, brussels sprouts, green beans, etc.? Check. Greens (deserves a special mention)? Check. Desserts you’ve been dreaming about for a while? Check. And in Dallas Thanksgiving tradition, the Cowboys playing? TBD on how fans feel about that right now. (That’s a whole other blog post). Now here’s the question: Stuffing or Dressing?

My mom makes an AMAZING dressing. Yes, I said dressing. Cornbread at that. And it’s damn good. But when I hear folks talk about their menus on television, they talk about stuffing. Ok, maybe it’s not a big thing or a great difference but growing up hearing dressing means something to me.

Few can tell you the difference between dressing and stuffing. I think it has to do with a Northern/Southern thing. But mostly, it’s the same except for the ingredients. Variations includes: oysters, rice, apples, cranberries, dates…You name it and it’s an ingredient.

Luckily, I learned how to make a close rendition of her dressing but it’s not the same. Probably because someone else is making it. And with the holiday just around the corner, it’s one of her staples I miss so much.

I think I will celebrate Thanksgiving on Thursday too, with a small version of my mom’s table. I’m drooling just thinking about it.

And don’t forget the gravy.